I have been to lots of different nurseries, but this is the first one I’ve come across where the plants have to be grown for so long before they’re sent to us. I’m talking about the Laurus nobilis, a mythical plant which has been the life’s work of Gova Nursery. Jack Goossens tells me all about it. While we walk through the fields outside, I find out how this noble plant has recently given the nursery an unexpected twist. But Jack kicks off with some history.

My parents grew Kentia palms in the 1970s. When the oil crisis hit, they started looking for floriculture that consumed less energy. We’re located in the south of the Netherlands, literally on the Belgian border, so it had to be something special that hadn’t been grown before in the Netherlands, and make the journey down for the traders in the west of the country worthwhile. They decided on the Laurus nobilis. With a nursery covering 23 hectares, we’re the market leader of this product.

I see Laurus nobilis in all kinds of sizes, from small pots to huge specimens. Is this the familiar bay tree, or are there different types?
These are all bay trees, with leaves that are ideal for using in barbecues and sauces, and to flavour meat. We sell the small pot size as a genuine bay tree. These are grown in a closed environment, and meet all the strict requirements to be officially allowed to trade as “edible”. We’re inspected 10 times a year, unannounced.

We grow everything from our own cuttings. Growing a laurel tree is a very time-consuming task. The plants that leave our nursery are 8 years old on average. This includes the small bay trees in 10.5cm pots that are 18 months old, so you can imagine how old the larger specimens are.
Every autumn, we move all plants to the covered greenhouse for the winter, then from mid-March we put everything back in the outside fields. It takes us about 8 weeks to put everything back outside. If there are frosts in the spring, the sprinkler system turns on, so that the water droplets freeze and not the plant.

“Ever since our civilisation emerged, Laurus nobilis has held a special place in it”

I can see a lot of old plastic pots here. What are they for?
Laurus nobilis is a top-flight product, so it has to have an upmarket appearance. Every plant is always given a brand new cultivation pot the moment it enters the trade. We use the old pots again for breeding. Any pots that break over the years are collected by the pot supplier who uses them to make new pots. 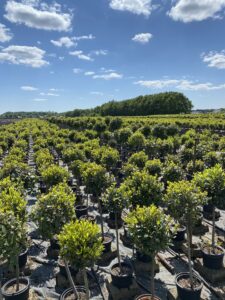 Besides the upmarket appearance you praised, what are the other special characteristics of the Laurus?
The Laurus is an evergreen with a subtle fragrance and classic appearance, and it’s a herb. Moreover, this plant has a lot of history and symbolic value. Its significance differs per country. Did you know that in Germany it plays a role at funerals, while in England and Ireland it’s a traditional Christmas gift?

It’s a quite expensive product. Have you got any sales tips for garden centres?
This plant is ideal for cutting in shapes, so most of our plants are supplied in a pyramid shape or as a sphere on a stem. I recommend garden centres to have a stock of about 2/3 sphere-on-stem and 1/3 pyramid. Display the product in an attractive place in the garden centre’s cold greenhouse.

We can also help make the display more attractive. Ever since our civilisation emerged, Laurus nobilis has held a special place in it, so there’s plenty of information for consumers. We’ve developed various sales concepts, and had them translated into 12 languages. Anybody interested should contact Javado. Our themes include Aroma, Wellness, Classic, Trendy, and Christmas.

How do you manage to create these beautiful spheres and pyramids?
We developed machines in-house that cut these shapes. The only problem is that the machines cannot see if they’re neatly cutting a branch or slicing a leaf in half, so we cut mechanically one year before delivery. The plants that leave the nursery a year later are attractively shaped, and neatly trimmed by hand.

We wanted to do something special with all the leaves we cut back, and that’s become quite a story in itself.

Has that got something to do with the laboratory we just passed?
Exactly. We’re permanently collecting bay leaf waste, which we used to put in the compost. However, we were sure it had some residual value. We did some research, and found out how to extract the essential oil from the waste. This oil is useful for all kinds of things, in areas such as the cosmetics and food industry. Our pruning waste has now become valuable. It felt so good that we’re currently using our expertise to carry out studies for growers of other products. Lots of growers have got in touch with us to look into the value of the roots, leaves or flowers of their products.