We often talk about the story behind a plant. In this case, there’s also an unusual story behind the nursery that we visit. Read about what made Ed Stofbergen, from Stofbergen Plantcompany, the champion of the bromeliad product group.

How did Stofbergen Plantcompany come into existence?
The family has been breeding plants professionally for many generations. Personally, I didn’t want to be a grower, because I’m a bit headstrong, just like my father, and like to go my own way. I studied landscape architecture, and started my career as a gardener. Then my father wanted to expand, my uncle wanted to leave the company, and on top of everything I didn’t have much work because of a severe winter. That’s how I entered the company 20 years ago.

Were you able to make your voice heard in the nursery?
Our company was fully focussed on supplying bromeliads for the mass market, only the known species in large numbers and at low cost.  However, I wanted to make my mark, and started experimenting. That’s how I came to discover the diversity and beauty of the bromeliad family. I’ve always spent a lot of time in jungles and the experimental areas of the two bromeliad breeders. At a certain point, I discovered something great: Vriesea Hieroglyphica, bromeliads whose various leaf patterns give them a very exotic appearance. That almost led to the demise of our company.

What went wrong?
The first test batches Vriesea Hieroglyphica were popular, so I started thinking big and growing large numbers as quickly as possible. That led to me bringing an attractive and fairly exclusive product like Vriesea Hieroglyphica to the market for mass retail. That all went completely pear-shaped. It cost us a lot of money, and we almost went under. Obviously that was a major blow, but I licked my wounds and realised two things: I could learn a lot from this mistake, and there’s potential in the extended bromeliad family.

“I licked my wounds and realised, I could learn a lot from this mistake”

What happened next?
The well-known, brightly-coloured guzmanias and vrieseas that have been sold over the years has led to the bromeliad acquiring something of an ‘artificial’ image. Only fair, because the range was purely based on straight plants. Trends are changing however, and now whimsical and crooked plants are also popular. Although I still believe in broadening the range, I now take a very different approach. I want to pioneer with new species and varieties, but I also need feedback from the market. That’s something I can’t do alone, so I work together with bromeliad breeders and the trade. 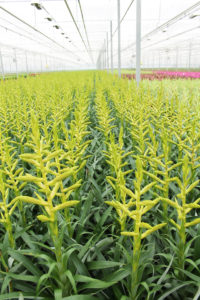 We walk into the greenhouse and look at Ed Stofbergen’s showpiece.
This is Tillandsia oerstediana. This beautiful plant perfectly illustrates what I want and what it costs to achieve it. I came across this giant plant, that can grow up to 6 metres in height, in the jungles of Costa Rica. I told the breeder that I wanted to grow this plant as a houseplant, and was declared nuts. However, I didn’t give up, and after five years of insisting we started testing it. It took seven years of testing to successfully grow it as a houseplant. It’s turned into an absolutely beautiful product, exactly as the landscape architect in me saw it. We started selling small numbers. The responses were excellent, so we started scaling up to numbers that we thought the market could absorb. We’ve now introduced other successful, new bromeliads to the market, just like we did with Tillandsia oerstediana.

We drive to a second, small greenhouse a little further on. What’s happening at this site?
R&D is very important for our company, so we use this site for experiments. Each species and variety has its own needs in terms of the amount of light, humidity, and so on. That’s what we’re trying to discover here. We’re also trying to find new varieties, which I do in collaboration with the breeders. If I have a big success on my hands, we meet up and look together to see if it suits our company, or would perhaps be better at a colleague bromeliad grower.

Can you give us an example?
Something really cool is on the way: bromeliads as patio plants. These grow into large plants that aren’t suitable for our nursery, so we passed them on to another bromeliad grower.

How do you see the future of the Bromeliad?
There are still a lot of unusual products under development. These are being gradually tested, then placed on the market. Success depends on the cooperation between the breeders, the bromeliad growers and the trade. I’m convinced that the versatility of the bromeliad range means there’s a beautiful bromeliad for every taste. My challenge to garden centres is to get off the beaten track, and show consumers the variety of the beautiful bromeliad genus.