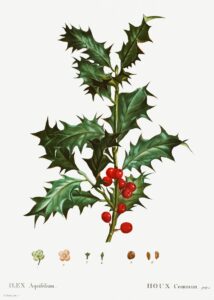 You may well suddenly come across it nestling between the bare trees during winter walks; holly, with its characteristic, glossy green leaves, and red berries. Ilex aquifolium, as it’s called in Latin, is a special plant native to Europe, about which there is much to tell.

Myth, magic and Christmas carol
Holly is the source of much superstition, myth, magic and religion. The Celts and Romans brought holly into their homes during the winter. They considered holly’s ability to maintain its leaves magical, and hoped holly would guarantee the return of spring.

In Christianity, holly was adopted as a symbol of Christ’s crown of thorns; the red berries a symbol of his blood and the evergreen leaves a metaphor for life after death.

The tradition of decking our homes with holly in the winter continues to this day. The Christmas carol ‘Deck the halls with boughs of holly’ was written in 1852 to an even older melody, and still manages to create that perfect Christmas atmosphere.

The species name Aquifolium appeared in the writings of the Roman author Pliny the Elder. It means ‘thorn leaf’ (Latin acus ‘sharp’ and folium ‘leaf’).

Berries
We all recognise the red berries. Officially, these are berry-like drupes. They are poisonous to humans, but not to birds. Hawfinches eat them, but they’re not the favourite fruit of most birds. Holly berries are only eaten by birds such as thrushes in deep winter, when no other edible berries can be found.

Nevertheless, holly is a very useful plant for birds, as its spiky leaves provide a safe haven for breeding.

Female king and male queen
Ilex aquifolium is a dioecious species, meaning there are individual species that are either male or female. The small flowers in female species develop into the familiar, festive berries in the autumn. The flowers are pollinated by bees and other insects, providing there are both male and female holly plants nearby.

A favourite for furniture makers
Holly wood is compact, with a fine texture and the whitest wood around. It has been favoured by furniture makers for centuries, especially for decorative inlay work.

Ilex x meserveae hybride
Kathleen Meserve crossed I. aquifolium with I. rugosa. The result is Ilex x meserveae, a compact holly with dark green leaves that contrast nicely with the red berries.

The female species is called ‘Blue Angel’. This beautiful, compact shrub is widely sold in garden centres. It can be pollinated by the male species ‘Blue Prince’, or male aquifolium species.

Placement
Can be placed in a shady spot, but also does well with plenty of sun. Variegated varieties need light to colour properly. Holly tolerates air pollution and sea air.

Soil
Most soil types are suitable, as long as they are well-drained.

Pruning
Holly is easy to prune, either to keep it compact or form shapes. Pruning results in beautiful, full plants. The safest time to prune is in December when the plant is dormant. However, this can lead to fewer berries the following year. You can also prune in August, cutting around the flowers.