Together with Vreugdenhil Bulbs & Plants, our main purveyor of Hippeastrum, we take a close look into the world of this spectacular bulbous plant. Jochem Vreugdenhil is a third generation grower, and bursting with knowledge about this crop.

It’s certainly a bit confusing. One person calls it an Amaryllis, while another says it’s a Hippeastrum. Who’s right?

“The correct name is actually Hippeastrum. The Amaryllis is also a genus of plants and very similar to Hippeastrum, but it’s not the plant we see shown off in garden centres and people’s homes. You can identify the Hippeastrum by its hollow stem, which the Amaryllis doesn’t have.”

The name Amaryllis is more well known, so all Hippeastrums are described as Amaryllis in the Javado webshop.

A piece of history

“Did you know that Hippeastrum originates from South and Central America? Hippeastrum species can be found everywhere, from the tropical rainforests to the Andes Mountains to Mexico. The varieties that grow in rainforests have broad leaves and large flowers, while species from the Andes mountains can be identified by their smaller, spider-like flowers.

The Dutch brought bulbs back to Europe with them in the early eighteenth century to cultivate them. They managed to create a number of cultivars and hybrids.”

“Every now and then, new varieties come onto the market, but this is quite rare. That’s because it’s noticeable that new varieties, which are of course extensively tested, almost always lose out to ancient varieties such as Red Lion and Apple Blossom. Even so, sometimes an immediate hit is found, such as ‘Merry Christmas’, my personal favourite. Everything is spot on; the colour, the size of the flowers, and the compact, sturdy stem.” 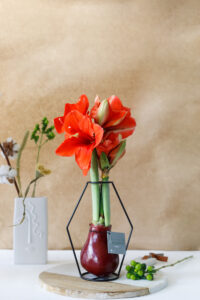 The secret of the “No Water Flowers Waxz®“

There’s no denying it; ever since Vreugdenhil developed the No Water Flowers Waxz®, these pieces of art have been a huge success. So how is it possible, a wax-coated bulb that blooms beautifully without any care? Jochem explains that it needs a lot of work to get to this stage.

“The basis lies in the principle of a bulbous plant. To increase its chances of survival, a Hippeastrum stores enough moisture and energy in its bulb to grow a flower even in the most adverse conditions. However, not any old Hippeastrum bulb is suitable for wax-coating. We carried out extensive tests to find the most suitable varieties. And it doesn’t end there; the way this bulb is grown also affects how well it does as a wax-coated bulb, so we only use the bulbs with the appropriate propagation. Another part of the secret lies in the type of wax. You might be surprised to learn that there’s a lot of research behind this. We developed a special mixture that’s applied in layers, but which still allows the bulb to breathe.

We’ve noticed that our Hippeastrum No Water Flowers Waxz® is often imitated. But be careful, as bulbs with a ‘normal’ wax layer will rot and bulbs of the wrong type or that have been grown in the wrong way won’t flower properly. To show how much we believe in our product, we guarantee that every bulb with the No Water Flowers label will flower”

Bulb on the pot or in the pot?

“The bulbs are sorted by size. The larger the diameter of the bulb, the better it performs. Larger bulbs are slightly more expensive, so it would be a shame if they were completely under the soil. A Hippeastrum bulb also has a certain ornamental value. Personally, I think it’s very pretty when the bulb can be seen clearly.”

Tips & Tricks from the grower

“A Hippeastrum is an ideal indoor plant. It’s easy to care for, and one of the most spectacular flowers I know. If a Hippeastrum is planted in a pot, make sure that the soil remains slightly moist, but not too wet. You can place it in front of a window, or in a place with less light. When one of the flowers has finished blooming, cut it off.

Getting it to bloom again is quite a challenge. If you want to try anyway, the best thing to do is cut off the dead flowers and let the plant grow until May. Then cut off all the leave,  and put the pot in a cool place like a cellar. In September, take out the pot and start watering. Make sure that the soil in the pot warms up well, so place it near a heater, for example. There’s a good chance that the bulb will bloom again, but never as beautifully as the first year.”